Greetings from Carmen and Eric’s small groups (Amy, Brook, McKinnon, Noah F., Erin, Catherine, Marty and Noah Y.). Today was our day of service to the people of Detroit and our chance to Proclaim Justice.  It was MOVEMENT in the MOTOR CITY as nearly 10,000 youth worked throughout the Highland Park Neighborhood.  We partnered with Focus Hope (a local organization) who is working to improve a 100 block area.  We were part of “Keep it 100! (keeping things 100% livable).   We were assigned to help clean up, paint, prune weeds and generally help a neighborhood become more livable.  It was hot and muggy but it was a fantastic day.

We were struck by the beauty of the homes that had fallen in disrepair and had questions about why things had gotten that bad.  In between these broken down houses, there were neat and well kept homes – signs that people had not given up. Some people, like neighborhood historian, Miss Cleveland, joined us in our work.  Everyone we encountered was so thankful and many people offered us refreshments like water, cheeseburgers and freeze pops.

Some of the many highlights were:

We are including pictures of Amy and Azarria, our group painting curbs and Larry, a 10 year old future football star, with his football crew. 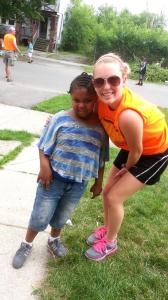 As we were walking back to our buses, one more person called to us from his porch.  It was Everett Ferguson, a 95 year old Navy veteran who told one of our adult leaders, Erika Yoney, that seeing us in his neighborhood was the “best thing he’d ever seen.”  God gave us the chance to serve and build bridges today. It was a joy to be helpful to the wonderful people we met and it might just be the “best thing we’ve ever done.”